LOCKFIX24 have the solutions to all your domestic lock problems - 24 hours a day. Read more

LOCKFIX24 have the experience to help you with all your physical security problems within any commercial environment. Read more

LOCKFIX24 provide a professional 24 hour emergency service, enabling you to get back on the road as quickly as possible. Read more

The question I am always asked by people curious about what a locksmith does.

Well I don't know I can answer this as I've had so many different jobs over the last 20 years, each one different from the last, and out of the tens of thousands of jobs I've attended so many of them have been just out and out strange even weird in the extreme, I cant really narrow it to just one job because if I do I just know there is a stranger one just round the corner.

I've been to not so pleasant crime scenes, over the top evictions. Had requests to open homes for Landlords who haven't seen or heard from their tenants for ages, then to find a dead body inside. I've gone along on Police raids, social service welfare checks, even to houses running illegal brothels with prostitutes chained to beds, even had to help with entry in to buildings where hard core criminals in the human trafficking business have been hiding young vulnerable people, and in recent years to many houses where young people under the care of social services in local authority housing are being used by gangs in so called cookooing.

There are some mental and weird people out there, gang members, lairs, nutters, stupid people and even stupider people, I've had knives pulled on me by criminals and attacked by estranged spouses on more than one occasion accusing me of having affair with their other half even though it's obvious I'm just there to change the locks to keep them out. I've seen large scale illegal drug operations even dodgy backstreet casinos.

I've been to the poorest of the poor, and at the opposite end of the scale the mega rich in their lavish homes. I'm sure I have done work on locks inadvertently for people working in organised crime, I will never know as they look so normal and respectful, except the ones I met once with Russian accents, thought I wasn't going to get out of that place alive...maybe it was the drugs they tried to offer me as a tip!!!

There are so many different things I've seen on the job the list is long, I could have never imagined any of this happening when I first started out, and I was a soldier before all this and thought I'd seen it all already.

My wife, always says "you never tell me about your jobs". I usually don't tell her details, basically not to worry her, and to avoid the 20 questions

When I finish work I leave all the weird shit in my van and head for the sanity of my home, knowing it will be there tomorrow waiting to take me to the next strange moment.

Basically I don't consider anything strange anymore and try not think to hard about it as I know in a few days time something weirder will pop its head it up to trump it all.

But to some up, for every strange situation I come across there is the flipside with hundreds and hundreds of lovely people I come in contact with every year just living their lives normally doing wonderful things in the community.

Kenny was great when I locked my keys inside the flat! Really fast and friendly service! Would definitely recommend!!

Job of the Week 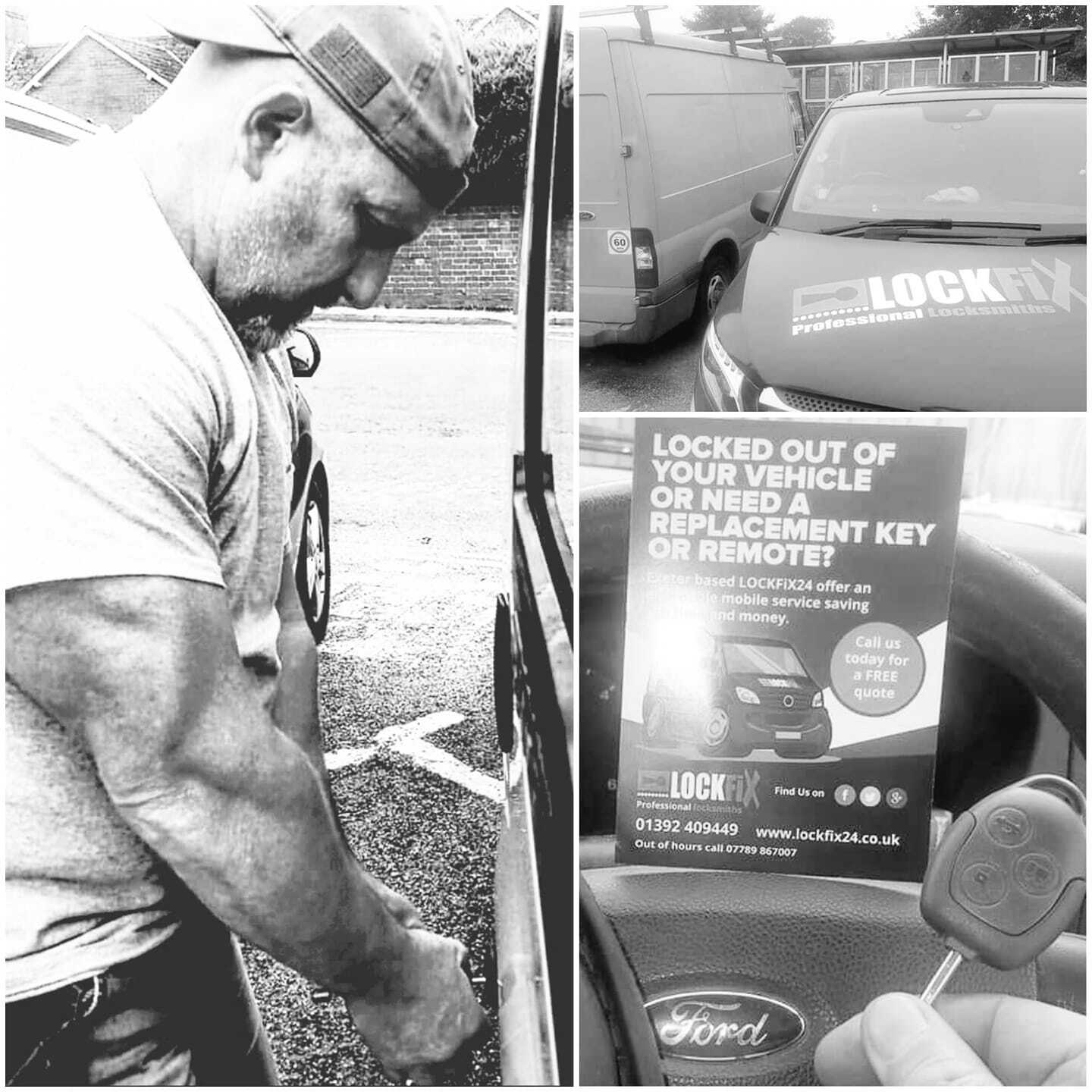 About Us & Our Service

WELCOME TO LOCKFiX24. We are Professional Locksmiths based in Exeter. Established since 1999, we have been serving thousands of happy customers across Devon and parts of Somerset, 24 hours a day, 365 days a year.

Owned and run by Kenny Howell, who previously served many years in HM Forces as a Royal Military Policeman, LOCKFiX24 provides an extensive range of professional domestic, commercial, and automobile locksmith services.

Locked out or just looking to have your locks changed? Or simply in need of a new car key remote? Whatever your key or lock problem, wherever it maybe - your home, place of work, or your beloved car, we will be happy to help.